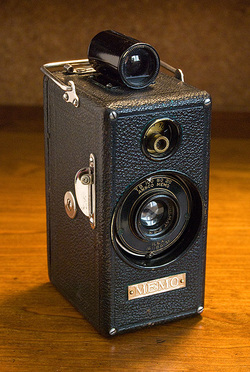 1929 Agfa Ansco Memo, half-frame 35mm, wooden box camera covered in leather. Very historical and one of the early, American made, 35mm still cameras. They were first produced in 1927. The one I have is from 1929. These cameras shot cine film (35mm perforated movie stock) that was rolled into dedicated Ansco metal film cartridges (earlier cartridges were made of wood). This was before Kodak introduced the standardized 135 daylight loading film cartridge in 1934. Film was advanced by a clever spring action claw, similar to a movie camera that shoots one frame at a time. It took 50 shots on a strip of film, in half-frame format (18x24mm).  Ilex shutter with speeds of Time, Bulb, 100, 50 and 25. Ilex Ansco Cinemat f6.3  40mm fixed focal length lens (equivalent to 60mm for a full-frame 35mm). Some models had focusing lenses. There is a tripod socket on the bottom. The camera is quite small  measuring only 2 x 2.5 x 4 inches. It was popular with private detectives because it was compact, had a large bright viewfinder, and photos could be taken rapidly one after another with the spring loaded film advance. 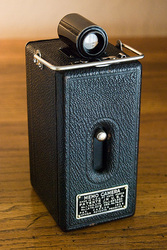 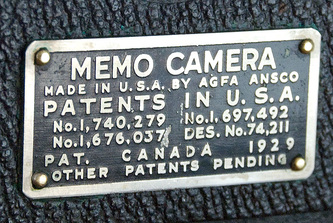 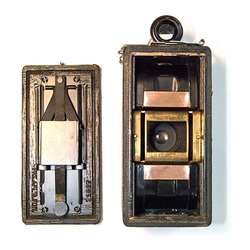 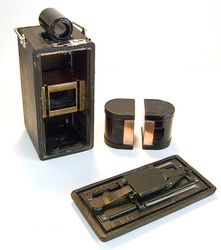 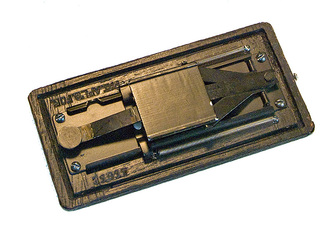 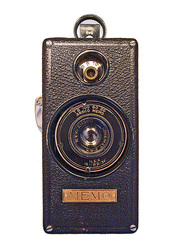