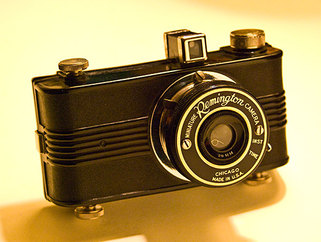 Remington miniature "candid" camera circa 1940's. Simple low budget plastic and metal camera  made in Chicago that was obviously styled after the Argus A 35mm.  It made 16 half frame images on 127 film. Fixed focus 50mm lens with two speed shutter (Time and Instant) and tripod socket.

"Utility Manufacturing Company was a camera maker originally based in New York. In 1941 it was bought by Spartus and moved to Chicago. It made cameras of its own brand Spartus and under the brand or company names of dozens of companies. Spartus and the related companies produced dozens of generally low budget cameras under almost as many brand names between the 1930's and 1960s. Spartus/Utility/Herold produced cameras under so many brands and model names (including Acro, Camera Man, Elgin Labs, Falcon, Photocraft, Cinex, King Sales, Faultless, Bernard Products, Monarch Mfg, Magestic, Galter, Mar Crest Mfg, Remington, Deluxe Products, Rolls Camera Mfg, Waldorf and of course the classic Seymour Sales!) that it's almost impossible to keep track. However they all have the same distinctive styling, and the labeling "Chicago. Ill. U.S.A"." (onetwoseven.org.uk) 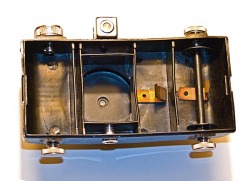 Interesting feature: the second compartment from right was for storing spare roll of film.